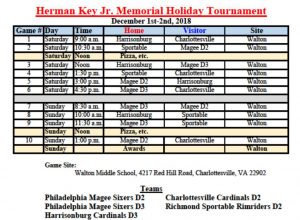 Five teams will square off for the tournament crown, including the #7-ranked Philadelphia Magee Sixers (D2), the #14 Richmond Sportable Rimriders, and the #9 Charlottesville Cardinals.  The tournament field will also include the Philadelphia Magee Sixers (D3) squad and the Harrisonburg (VA) Cardinals (D3).  Harrisonburg finished the 2017-18 season ranked second in the nation in the National Wheelchair Basketball Association’s D3 division.

The round-robin tournament kicks off at 9:00 a.m. on Saturday at Walton Middle School (4217 Red Hill Road) and wraps up with the final game on Sunday at 1:00 p.m.