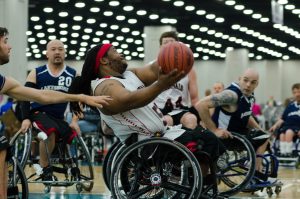 Charlottesville Cardinals In The Hunt For A National Championship.

The Cardinals earned a spot in the NWBA’s Division 2 “Sweet Sixteen” and will take on the #4-ranked Austin Rec’ers at noon on Thursday, April 12th.

The Cardinals will play a second game at 5:00 p.m. on Thursday and also play again on Friday and Saturday.  Once a team losses in the competition they are eliminated from contention for the championship but still play for a final ranking in the top sixteen.

“We haven’t played the Austin squad this season but we know them pretty well,” said player-coach Tom Vandever. “We’ve had some great games over the years with them and we feel good about our matchups…but we’ll have to see which team makes their shots.”

Charlottesville is 15-7 in Division 2 play this season and is seeded #13 for the nationals.  This Sunday the team will hold its last pre-tournament practice before heading to Kentucky on Wednesday.